Let’s face it – a lot of people think of Bing Ads and assume it caters to people who for some reason can’t get Google to load.  However, the reality is that while Bing doesn’t command a huge or even majority of the market, they do have a significant portion of it – and a number of individuals who use Bing don’t actually use Google at all.

In fact, while Google clearly controls the majority of the market, they lay claim to well over two-thirds of the Internet search market, the demographics of Bing’s dedicated users tend to be older, college graduates and more affluent.  Unsurprisingly, these individuals also tend to spend more money online.

In addition to aggregating searchers from Yahoo Finance, MSN Money, Hotmail and Yahoo Mail, Bing is also the search engine that runs web searches through iPhone’s Siri, and 70 percent of Bing’s mobile searches come from iOS.  If you rule out Bing, you may be ruling out a huge portion of Apple users.

Not Everyone Ends Up At Google

As mentioned, Bing has a number of users that use the search engine exclusively.  For example, 11 million of the 14 million automotive searches that take place on Bing are done by individuals who never run the same search on Google.  Even more of note is that over half of the retail related searches on Bing, 32 million of 62 million, aren’t duplicated on Google. 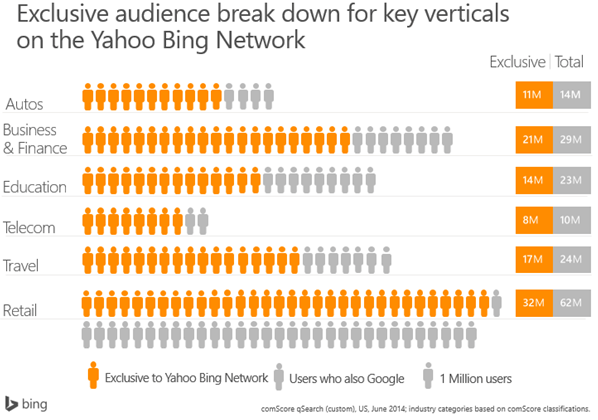 Let’s Not Forget; Bing Is Way Cheaper Than Google

If you are totally cool with missing out on millions of potential customers, are you also okay with dismissing the savings on ads that using Bing represents? ROI is a huge part of investment, and in highly competitive areas, AdWords can take a chunk out of your profits. However, since Bing doesn’t have the same number of users, competition is stiff rather than voracious. Additionally, since Bing users tend to spend more, you could be investing less for greater profits.

I’m not saying that you should move all of your advertising to Bing – far from it. But you shouldn’t dismiss it out of hand either.

For more details about Bing’s demographics and stats, check out this Search Engine Watch article.

NEXT ARTICLE →
Facebook ads used for an elaborate evil prank