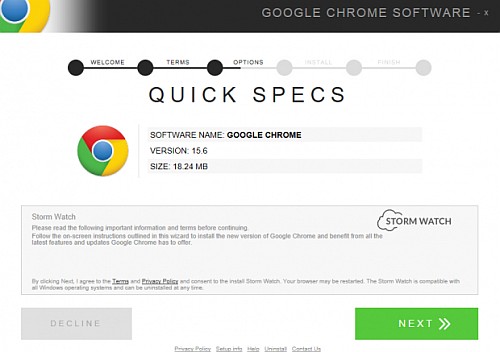 If this looks weird, it’s because it’s actually a site designed to fill your computer with malware.

Yesterday we wrote about changes to Chrome that would effectively ax murder Flash ads, but if you’re using Bing to look for a Chrome download link, you may get some interesting results as well.

Expert Reviews discovered that Bing’s UK site was showing ads along with search results for Google Chrome. Instead of having a variety of legitimate links in addition to Google’s own installation page, such as from CNET, there were also links to websites that are designed to fill your computer with spyware laced garbage.

According to Expert Reviews, when they visited one of the ad linked sites, it did eventually let them download Chrome, but not after first attempting to download program after program into their computer. The decline button way greyed out, and if you did click on it, it simply didn’t start automatically downloading yet another piece of malware laden software.

Being curious (read:nosy), I decided to see if there were similar issues when searching for Firefox. I discovered that in addition to legitimate ads that lead to Mozilla’s download site, there were also ads that lead you to the darker parts of the Internet.

To be sure that I wasn’t painting a legitimate, if less known, download site with the same brush, I clicked on the ad. My computer was not amused.

I could not duplicate the issue with Chrome, but since ads display randomly, it could either be fixed or I simply didn’t see a “bad ad” after a few reloads. However, the fact that Firefox ads clearly lead to Bad News Bears sites indicates that Bing is growing increasingly desperate for ads and ad dollars and they’re willing to show just about anything.