Note: If you disagree with the content of this post, please don’t strangle the puppy, just tell us why in the comments.

This is a quasi news article, quasi think piece, quasi opinion essay. It is also in the neighborhood of TL;DR, but I’ve broken it up with headers for easier skimming. Consider yourself warned.

What is Net Neutrality?

Net Neutrality is, at its roots, the idea that all data should be treated equally. In other words, video streaming or file sharing services should not be kneecapped in an effort to reduce overall bandwidth outputs from an Internet Service Provider (ISP).

A more technical description, from a Washington Post article, describes it as:

[Net Neutrality] calls on Internet Service Providers (ISPs) to treat equally all Internet traffic traveling on the “last mile” to a consumer’s device, without prioritizing the packets of any particular information source, including each ISP’s own content.

This on the face of it, sounds like an excellent idea that only someone on the payroll of big telecom could argue with. In general principle I agree. In practice, however…

When most legislators, Barack Obama included, refer to Net Neutrality, they aren’t actually referring to NN per se. What Obama announced is actually turning the Internet into a public utility. This is a horse of a different color, to say the least. From the Guardian article linked:

This announcement led to this tweet from Ted Cruz:

"Net Neutrality" is Obamacare for the Internet; the Internet should not operate at the speed of government.

Which then led to this post from the Oatmeal, which included this rant: 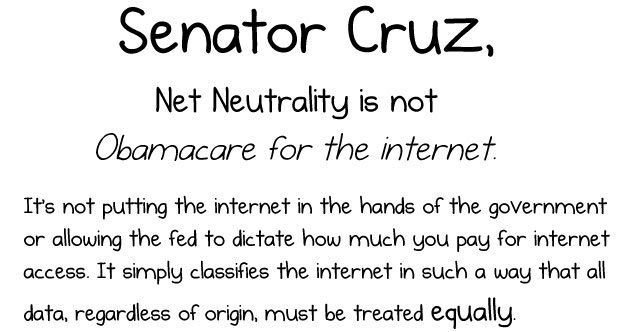 If you hate Ted Cruz and love the Oatmeal, you’re not going to like what I have to say… The Oatmeal is wrong. Other points made in his post are accurate 1, but that one is not.

Why Net Neutrality, or what’s being proposed, is bad

First and foremost, if all traffic were given equal consideration, e.g. emails and video streams were put on equal footing, you’d actually kneecap the video stream. Right now, even without NN, ISPs prioritize video and audio streaming. If ISPs actually treat email and video packets the same, it would degrade video quality, cause lag and generally make you want to kick your router. One of the challenges the FCC faces in creating rules is to not cause problems that don’t exist now by requiring this equal footing of data transfer.

As explained in an article in the Huffington Post:

In implementing network neutrality, some differentiation of traffic must be allowed on the Internet, even encouraged. Network operators should be able to block malware and denial of service attacks, for example. […]
There are many thousands of interconnection agreements among network operators, backed by massive amounts of traffic engineering, caching overlays, and other mechanisms to meet business and technical parameters. If the Internet story is one of a neutral network, it’s also one of private firms negotiating arrangements and managing their networks as they see fit.

In other words, a Net Neutrality law would be a boondoggle of convoluted language on what ISPs can, can’t, should and shouldn’t do. All this detailed technology regulation would be coming from a government which is still attempting to fix the Obamacare site with duct tape. 2

Why Net Neutrality is so popular among so many people

If you were to say to most people that ISPs are scrofulous pratts, most people – myself included – would vehemently disagree, averring that they’re much worse. By being complete asshats – lying about expected uptimes, speed, features, providing atrocious “customer” “service” – ISPs are about as well loved as lawyers. Of course people want to jam regulations down their throat. However…

I used to work at an ISP 3, and I can tell you that increased regulation will almost definitely lead to higher prices, decreased availability and general badness.

Every year, even though I was in the Internet / VOIP department, I’d have to deal with furious / confused callers who wanted to know why they were seeing ads saying that [my employer] were no longer going to be broadcasting X network. The reason is that the battle over what we were going to pay for annual network subscriptions generated so many calls, we had to be all hands on deck.

One of the main reasons that there was such warfare regarding what we paid for channels (technically packs of channels… for example, if you lost Food Network, you’d also lose Cooking channel and anything else related to that broadcaster) was that we did not want to raise prices anymore than we already were for the next year. Do you really think ISPs will eat the increased costs from new regulations or lost profits?

In addition to cost increases, speed and availability could be negatively affected by the proposed FFC rules. AT&T has already nixed plans for fiber optic upgrades as a result of the possibility of the law passing. Why? Well, fiber optics are expensive as duck, but they need to be replaced every once in a while because old cables are a) prone to producing poor service b) not up to increasing speed requirements.

Additionally, one of the reasons that rural areas lagged so far behind metro areas in even getting broadband is that these lines have to be run for bazillions of miles, and repeaters repeat noise and signal, so it’s not just as simple as running lines, you also have to put in hubs and such to relay data along with all the lines. In other words, getting Internet to my one horse town cost my ISP mad money. If ISPs face massive investments and new regulations, why wouldn’t they just table plans? Answer: AT&T pretty much already is.

Okay, so what does this have to do with online advertising?

Fairness. Equal Access. Income Equality. Many, many people feel that the government can and should create legislation that tips the scales towards better and more equal outcomes. If the government starts to regulate the Internet in general, why not start to take a close look at parts of the web specifically?

Some potential ways that I could see the government intervening in online marketing:

Note, I’ll be playing the devil’s advocate for arguments in favor of these regulations. These are not necessarily the positions of me or Tenscores.

Take a look at the suggested bids that Google says you should use when advertising for these two terms:

To advertise “masters degree program online” you’re looking at $60 per click and just shy of $150 for “new york divorce attorney.” Those prices seem pretty high, no? One might even consider using the term “price gouging.” Sure, these numbers are the result of the bidding actions of businesses, but they probably prevent a lot of smaller businesses from being able to advertise. That doesn’t seem fair or anywhere close to providing businesses with equal access.

There are already a ton of laws and regulations about misleading advertising on the books, but are they really sufficient for advertising on the web? I mean, look at all of the banners and text ads offering “free” things that either aren’t really free or, even worse, redirect you to another site entirely. Then you think about pop-up ads and the trouble that comes with ending up on a website when an ad appears to give you an option to close it but is really sending you to another website?

Well, don’t all these problems show us that we need more regulation? While Google and other major ad providers have quality controls in place, they certainly aren’t perfect. Perhaps if we placed more requirements and involved fines, screening of these dishonest Internet ads would improve and they would be reduced.

The specter of bigotry, racism and discrimination still loom large, and we may actually be encouraging it by enabling websites to choose who advertises on them. Perhaps we should consider that equal access means that Christian dating websites should have to run ads from Ashley Madison and that Organic Foods websites need to be required to show banners displaying Hostess cupcakes. By allowing websites to filter who has a sounding board on their site, aren’t we just saying that some types of discrimination really are okay?

—
More from the web:

[1] His point about Comcast – the ISP with worse polling numbers than the devil – is spot on. The thing is, that’s one example, and it’s not a common practice, even without Net Neutrality in place.

[2] This is merely an observation about the website, not the law. Tenscores is a business based in Canada; we don’t have a marmoset in this fight.

[3]Before you scream, “I knew you were just an ISP shill!” let me assure you that I do not have warm fuzzies from my experience so much as angry tentacles. Somewhat more on that in a post planned for next week.

← PREVIOUS ARTICLE
Amazon vs Kivin: A tale of corruption & fraud at Amazon advertising