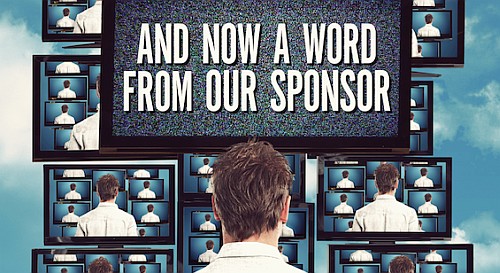 If you somehow have managed to avoid hearing the wailing and gnashing of teeth on the Internet from the last few days, it has been announced / discovered that Netflix is testing ads. There have been about a billion articles on the topic, but the initial report appears to have come from Motherboard.

First reports indicated that people were unsure if this was the first of many steps towards a standard slate of ads on Netflix, but after the massive outcry, Reed Hastings, co-founder and CEO of Netflix, to took Facebook to state that 3rd party ads weren’t going to be a thing. 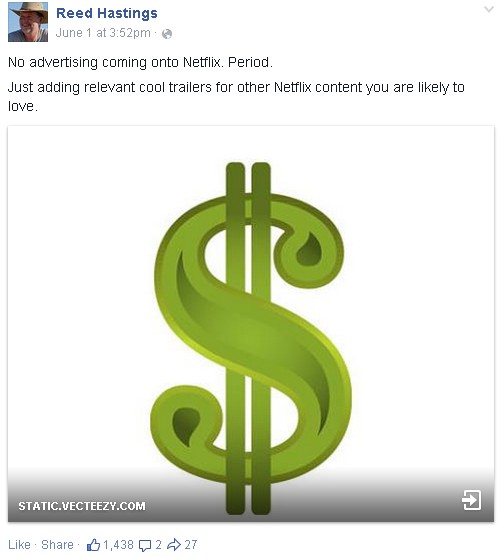 “We are not planning to test or implement third-party advertising on the Netflix service. For some time, we’ve teased Netflix originals with short trailers after a member finishes watching a show. Some members in a limited test now are seeing teases before a show begins. We test hundreds of potential improvements to the service every year. Many never extend beyond that.”

Yes, for the foreseeable future, especially after the massive group heart attack over the idea of 3rd party ads, the only type of promotional material you’re likely to see on Netflix is going to be related to their original series (serieses? serieseses?). However, I fully believe that in a few years you’re going to see 3rd party ads in one shape, fashion form or other.

When I worked for the Devil ISP, I was told that there was no way that the company would ever make sales a part of the metric that tech support staff were judged on. We were too focused on fixing things, and most tech people tend to be crummy salespeople. I was told by both the head of HR and a member of upper management that absolutely, definitely, 100% we would never be required to make sales as part of our jobs. That promise expired in less than 2 years.

Now, after coming out and saying that there’s no way, no how that Netflix will ever, ever show third party ads on the platform, they’re not going to be able to jump back on the ad bandwagon. They may even quietly retire what they’re doing now or scale it back a bit.

But they could start showing ads for movies or TV shows that weren’t Netflix properties that were coming soon or new to the lineup. That wouldn’t be too terrible, right? I mean, it would still just be ads about shows. Nothing too bad there. Very similar to what they’re doing for other series, yes?

And of course, well, if there were brand tie ins to shows, like perhaps a WalMart tie-in to Daredevil merchandise, would that really be so awful? To make them more palatable, they could put in some outtakes or special scenes in the ads so they felt more like extra content. It’s not really 3rd party advertising at that point, is it? I mean, they wouldn’t even have to say the name of the tie in advertiser. Just make it very clear where the products were coming from or what they were.

Further, they could make 3rd party ads sound like a good thing by taking a page from Amazon. Amazon offers discounts on Kindles if you chose one that has ads that display at the wake up screen. Netflix could say, we’re not forcing ads on you, we wouldn’t do that, but if you’d be okay with ads, we can discount your monthly service fee.

So, yeah, Netflix is going to almost certainly get into the 3rd party advertising thing in one way or another, they just won’t call it that.

[1] I try to keep these posts PG13. This sometimes involves making up swear words.