Facebook announces new “call” and “get directions” options for ads

Facebook is doing something that Google has been for years, which is offering advertisers the ability to include options to “Call Now” or “Get Directions” in ads with new Local Awareness Ads. The Facebook announcement doesn’t say that these are mobile only options, so it’s unclear whether the “Get Directions” option is also available on desktops.

Facebook is unsurprisingly allowing advertisers to filter people by area, but they’re vague about how far that range is. By nosing around, I discovered that you can put in a location and chose a preset radius in 10 mile increments or put your own in. Facebook also provides estimates for ad reach based on the location and radius you’ve selected.

This seems like it’s mainly directed at smaller local businesses because they focus on how easy it is to set up the ads and how affordable they are. Creating a large number of local ads would seem to be ponderous since you’d have to create an ad with a different number and location for each area, because there doesn’t appear to be any automation for large scale ad creation available. Furthermore, looking at the demo image for tracking, it’s pretty bare bones. 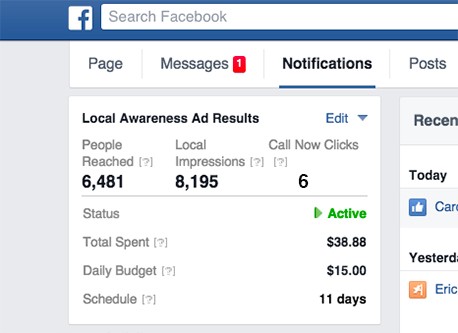 I’m wondering if Facebook doesn’t offer large scale services to its bigger clients to create these ads in bulk because it doesn’t make sense that they wouldn’t want to sell these ads to major retailers.

NEXT ARTICLE →
No, the new Facebook search feature does not spell end of days for Google