Following a two week long practical joke carried out by his roommate, an Internet marketing guru decided to use his knowledge for evil, hilarity and revenge.

Facebook allows you to target individual users for marketing campaigns by using their email 1, and the (anti-)hero in our story created a custom audience with his roommate as the targeted audience. 2

The goal of the prank was to have targeted and alarmingly specific customized ads show up on his roommate’s sidebar. Part of the reason that this ploy was so successful is that we know that Facebook, and most sites in general, collect tons of data about users. The main difference between Facebook and the ex that won’t let go is that we don’t mind Facebook scouring our Internet history.

With this being the case, our marketing maven was able to create some very specific ads and text that confounded his roommate and brought out his inner tinfoil hat wearer. The roommate being a sword sallower that, ironically, had trouble with pills, he was dumbfounded to see this ad show up. 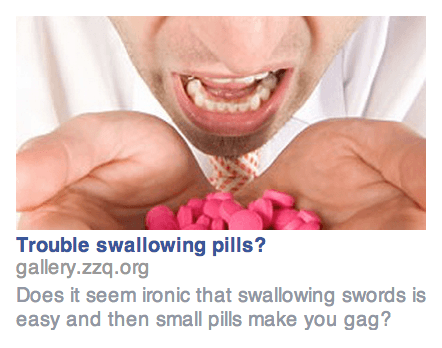 Ads involving swallowing, uh, adult oriented objects ensued, and it wasn’t until the roommate started to avoid talking on the phone and considering the possibility that Facebook was listening in did our maniacal marketer decide to out himself.

The total cost of destroying a roommate’s sanity? A mere $1.70. Moral of the story: evil is cheap given enough time and access to Facebook’s targeted marketing tools.

Read the whole story at My Social Sherpa.

[1]As pointed out in the post, you can use FindMyFacebookID to get a user’s ID if you don’t know their email.

[2]Facebook now has a minimum audience requirement of 20, but you can get around that by putting 19 women in and targeting the one man. However, I can’t see the use for that outside of treachery, so I’m not sure this is a particularly helpful tip for people who haven’t practiced maniacal laughter.

NEXT ARTICLE →
Are You Using Twitter Email Remarketing To Recover Lost Revenue?