One of the biggest obstacles that online advertising platforms face is showing advertisers that the money they’re spending is actually doing something. While most people do use the Internet for shopping, the vast majority of purchases still take place in physical stores, and tracking in store sales is somewhere in the general ballpark of tricky guesswork. However, Facebook aims to change that with Atlas.

According to AdAge, Facebook purchased Atlas from Microsoft in 2013. Atlas has been redesigned and relaunched, and the tool is going to be used to track cross-platform ad efficacy using Facebook ID. Ad performance tracking using the new system is expected to be far superior to cookies, which have only a 59% tracking success rate.

Tracking cookies’ biggest stumbling block is that they can’t follow people across platforms and browsers, so prior to Atlas, one person using Facebook on a computer, a tablet and a smart phone was being reported as though they were three people. Since Atlas uses Facebook ID to identify people, it can actually track the movements of people instead of sessions. When someone sees an ad on a smart phone and makes a purchase on their desktop, something that the managing director of Atlas states happens 41% of the time, Atlas can connect the dots and show that an ad did lead to a sale, even if it didn’t happen on the same device.

Following you to the store and looking in your cart

Along with cross-device tracking, Atlas is now being used to follow you into the store and take a peek at purchases you are making. Wired reports that when you give your email address and phone number to a store during checkout, this information is cross-referenced with Facebook. By sharing your email and phone number, you’re not only letting a store spam you mercilessly until they end of time, your data is also letting companies link purchases to your Facebook account.

Since large numbers of people link their email address to their phone number in Facebook, Facebook can assign your purchases to the appropriate Facebook account. It’s all done anonymously using a hashing system that generates something that probably looks like a cat walked across your keyboard. The system uses the same encoding on both sides, so Facebook simply matches the encoded mishmash without actually letting companies see Facebook account or user information. 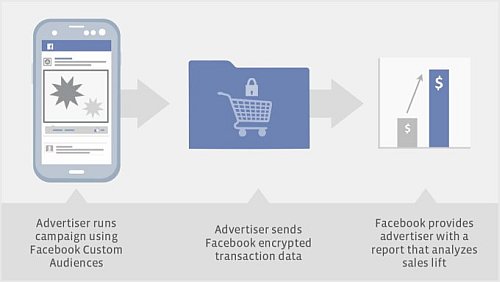 Thanks to Atlas, once you’re apart of a store’s system, they can tell if you’ve seen an ad and made a purchase based on it, even if you didn’t click the ad. If this seems invasive and stalkerish, it’s because it is, but it’s also a truly effective way of proving the worth of Facebook advertising to clients with physical location.

Google recently announced that AdWords will begin showing store visit conversion data, but since they’re playing pretty close to the vest about their methods, it might involve a Magic 8 ball and a Ouija board. Google could be using a method that works similar to Atlas using Google+, but Google+ doesn’t have nearly the same active user base as Facebook, and people’s phone numbers aren’t nearly as integrated into a profile as with the Facebook. In other words, my guess is that Facebook has the superior tracking tool thanks to using Facebook IDs to track these kinds of things.