Adobe Digital Index just release their third-quarter Global Digital Advertising Report, which was based on half a trillion Google and Yahoo/Bing impressions and over 400 billion Facebook pages. The report indicates that although Google is still the unquestionable leader in PPC advertising, Bing is continuing to chip away at AdWords.

Google Still King of the Hill

In spite of the fact that Bing and Facebook have both seen pretty significant growth, Google still is the Master of the Ad Spend Universe. The ADI report shows that a quarter of Internet traffic is driven by Google, and that although search share dropped one percentage point to 70%, they still saw a 22% YOY growth in ad spend. Additionally, Google Shopping Ads saw an incredible YOY growth of 35%. Google also has a near death grip on Europe, with search share right around the 90% mark for most of the continent.

Another thing in Google’s favor is an increase in the YOY CTR, up 14%, while prices remained relatively stable, with a CPC growth of only 4%. 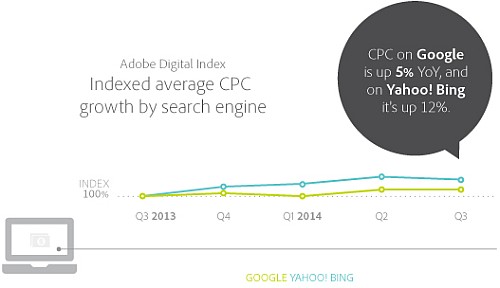 Bing on the other hand saw a YOY CPC cost increase of 12% while CTR remained pretty much flat.

I’ll be the first to admit that I’d long written off Bing when I first started writing for TenScores, but my mind has slowly been changing. Google is likely to reign supreme for the foreseeable and unforeseeable future, but thanks to global growth in online ad spending, the little search engine that could is experiencing remarkable growth. As you can see in the chart below, while both Google and Bing saw YOY growth in ad spend, Bing saw a much larger increase. 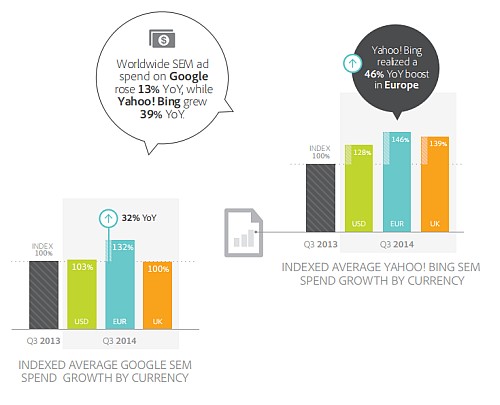 Google saw a solid growth of worldwide spend of 13%, but Bing grew an astonishing 39%, in part due to a 46% YOY increase in European ad spend. Bing also saw a YOY ad share increase of 3%. Of course, this type of growth is much easier for Bing since it has so much room to grow into compared to Google, who basically own the market.

However, the biggest indication to me that Bing should be taken seriously is not its progress in obtaining search market share but the fact that Bing drives higher revenue per visit traffic than either Facebook or Google. 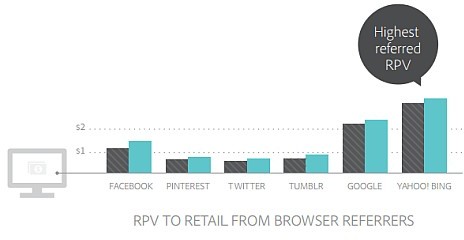 In fact, according to a senior analyst at ADI, Joe Martin:

Because of this finding, we think marketers should optimize campaigns on Bing first, so they are getting the higher-quality traffic, and then move to Google for the bulk of the traffic.

[1] I also put so many graphs in this post, I felt like I’d just about come to this point.