Would you pay to get rid of ads? Meet “Contributor” by Google 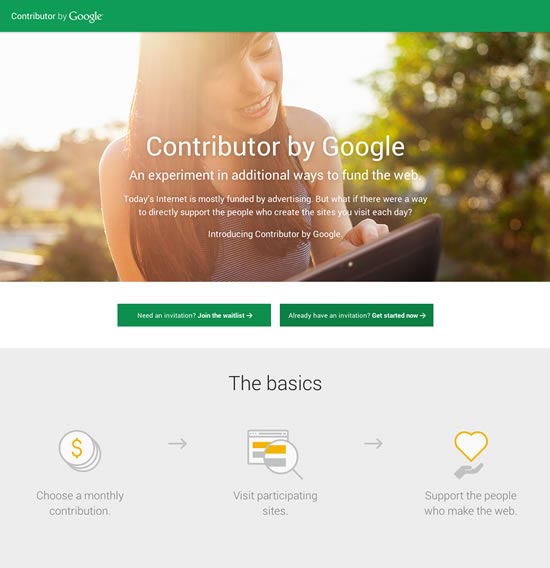 Google is testing a new way for it and websites to profit from the Internet without using ads: Google Contributor. The program is basically a crowd funding subscription service with a touch of bribe thrown in so you don’t have to see ads. Currently, it’s in the experimental stage, with only a few websites taking part 1, and you have to join a wait list to be able to participate as a subscriber.

As of right now, subscribers can choose to pay between $1 and $3 a month, and for this small payment, they won’t see ads on sites that are in the Contributor network. Instead, they’ll either see a pixelated area where an ad would be or a thank you message. 2

Who gets paid and how

When The Register asked Google how much money websites would get for being a part of the Contributor network, a spokesperson said:

“We keep a portion [of the subscription fee] to operate our advertising network on which Contributor runs. This is the same amount we charge advertisers to show their ads.”

In other words, Google will make exactly what they make now, but websites that participate stand to see their revenue seesaw up and down depending on subscription and payment rates. If you’re wondering how Google can have any money left over for paying websites that participate, much less cover their own costs when people will only be contributing a few dollars a month, keep in mind that the average cost per 1,000 impressions for an ad is just $2.90.

I’m pretty sure this is doomed to failure

This sounds like a great idea in theory, but the reality is that while people may complain about ads, most aren’t willing to put their money where their mouse is. A number of articles say that if Contributor succeeds, websites could start looking to subscription services and paywalls as a way of making money instead of using ads. The thing is, there are already paywalls and subscription services, and they’re just limping along. If either was incredibly successful, they would already have been adopted as common practice.

The other thing is that people are used to ads. Look at sidebar ads on Facebook; they’re basically the no man’s land of ads because they’re essentially invisible. I suspect that one of the reasons that Facebook, LinkedIn and other platforms have started using sponsored posts is because people zone out ads that aren’t directly in their line of vision. Additionally, there are add-ons and programs that not only block popups but ads themselves. If advertising on websites bug you that much, you’ve probably already dealt with the problem and wouldn’t be interested in Contributor.

I can’t imagine that Google hasn’t already thought of all these things, which makes me wonder if they’re not just using Contributor as a way of proving the importance of Internet advertising.

[2] According to The Guardian, you have to stay logged into your Google account for the ads to not be displayed.