One thing that I like about Google is that they actually seem to be interested in selling ads in an honest way. Along with ensuring that ads are actually seen, they announced that they are now taking steps to reduce accidental ad clicks on mobile.

Unlike back in 2012, where they just asked people if they meant to click on ads, Google has simply figured out where most fat fingered clicks come from and taken steps to prevent people from clicking in error. For example, ads are frequently clicked when people mean to scroll down or to the side, so Google has made the outside edge of ads unclickable. 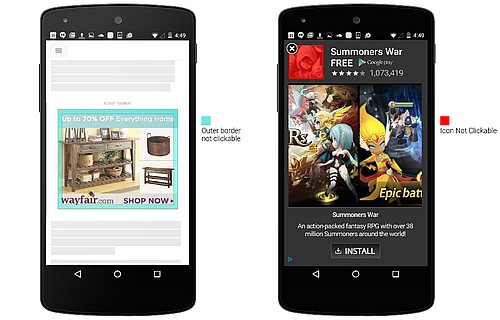 Another common issue, and I’ve run into this myself, is that the close ad button is right next to the avatar for app developers. Instead of closing an ad, users end up at an installation page. To eliminate this issue, avatars no longer take people to an installation or developer page, and to install an app, people have to tap install.

Google reports that there’s been about an average of a 15% increase in conversions due to eliminating these types of mistaken clicks. I have a few issues with Google, but you have to give them credit for not just taking the money and running.