Smart ads in a world where ads are despised. Mobile games demonstrate.

A few months ago, I started playing a game called AdVenture Capitalist. It’s sort of an automated investment game, but the interesting bit is that you could double your profits by watching a video ad.

You can also buy in-game boosters with real money, but the idea of having a game app allow you to do something that cost you nothing but still put money in their pocket seemed pretty ingenious to me. Apparently, I’m not the only one.

I recently started playing Cooking Dash 2016, which is a time management game. Lo and behold, along with being able to use cash to purchase gold, which allows you to buy in-game boosters, you could also watch a video ad. One viewing of a 30-second ad got you one gold. 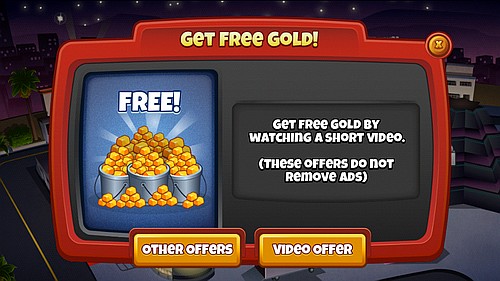 With AdVenture Capitalist, you are limited to five four-hour boosters per day; Cooking Dash allows you to watch unlimited videos. If you’re someone who enjoys playing mobile games but gets less enjoyment out of spending money on them, this is great. Same thing if you’re a game creator – you’re still getting cash, even if no one spends a dime on in-game purchases.

However, if you’re the person creating the ads, you’re probably a lot less enthused about this. Although the ads are full screen and play for the full duration, there’s a lot of repetition. Even with AdVenture, I end up seeing the same ads consecutively. I haven’t watched a lot of Cooking Dash ads, aside from the ones that randomly pop up in the middle of the game and don’t get you gold, but I can’t imagine there won’t be a lot of repeats.

This pretty much makes for pointless spending since after about the fifth viewing, if you haven’t made a purchase or download, it’s probably never going to happen. If they haven’t already, ad platforms should allow advertisers to limit how many times someone sees a particular ad, and advertisers should definitely look into this setting.