Mobile ads are on the rise, will desktop advertising soon be completely irrelevant?

Just a few days ago I wrote about how mobile ad spending was about to outpace desktop ad spending and then leave desktop spending twitching in the dust by 2019. I also noticed this eMarketer article saying that mobile ad spend is going to represent 51% of the global market by 2016 before it balloons to over 70% by 2019. After some thinking, it occurred to me this may not be the best idea, assuming it is what is going to happen.

They are, technically, predictions

I don’t want to dismiss eMarketer; I think they do a great job of taking current data, analyzing trends and making predictions. However, this is, at its base, just well-educated guess work. I will say that they do have a lot going in their favor, which is that trends are indicating people are spending more time on their phones than on computers and that people spend more time in apps than browsing the web on mobile devices.

Since marketers should be going where the eyeballs are, it makes sense that they would adjust their focus. Additionally, I do think that advertisers should be increasing the amount of money they spend on mobile advertising, but just not necessarily to the extent that only 30% of digital spend will go to desktop ads and possibly not with such a focus in apps rather than mobile browsers.

Buying on a computer, at least for now, is the preferred method

According to a study done by MarketLive, even after a 163% increase in purchases on smart phones, conversion rates for smartphones are three times lower than conversion rates on computers. This may change as people become more trusting of making purchases on a smart phone, but based on current and actual shopping trends, people still aren’t pulling the trigger to make a purchase on a mobile device nearly as often as they do on a computer.

In fact, increasing traffic isn’t really doing much to boost mobile sales, which I think this graphic from MarketingLand neatly demonstrates. 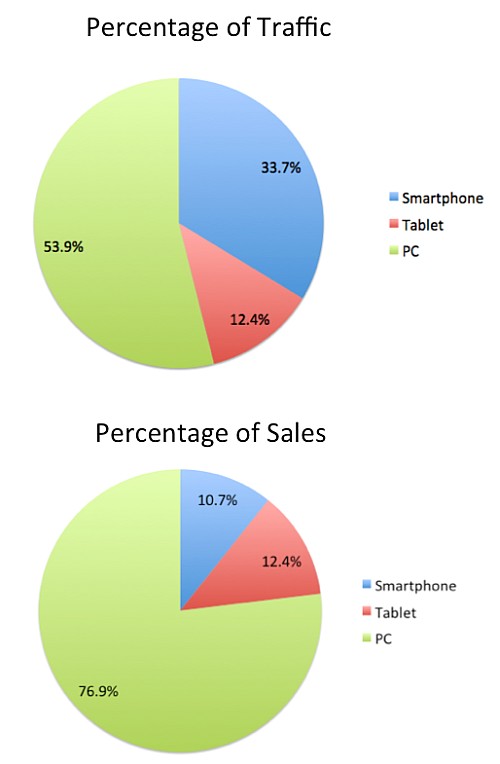 I’d also like to talk about how mobile searches drive local in-store shopping purchases. There are a variety of studies, including this one from Google, that indicate mobile searches frequently lead people to make in-store purchases. However, how can we tell if someone wasn’t already intending to go somewhere?

For example, I often do a search for a store’s hours, locations or stock before visiting a store that I had already planned to stop at. The search wasn’t a determining factor; the choice to go had already been made. In fact, that may explain why the numbers in the Google study are so high; up to 50% of searches lead to in-store visits.

What mobile ads can and should do

I think that mobile ads are probably a great way of increasing someone’s awareness of a product or brand, but if you’re looking for conversions or direct sales results, the data currently doesn’t support it. When it comes down to it, right now, when people are looking to buy something, even if they do their research on a mobile device, they’re buying it on a computer or in a store.

Another thing to think about is the fact that hybrid laptop-tablets are becoming popular, so instead of having mobile and desktop advertising, you may end up with smart phone and tablet-computer advertising anyway.

NEXT ARTICLE →
Twitter to shows ads in users’ profiles. Is there somewhere they won’t go?