Dark traffic: What it is & how FaceBook may be the biggest culprit

What is Dark Traffic?

Much like dark matter, something that scientists know exists but aren’t entirely sure what it is, dark traffic (aka dark social) refers to traffic that comes from an unknown source, often marked as “direct” by web analytics software. Generally speaking, referrers from email clients, text messages and apps that aren’t browsers fall under this heading. The phrase was first used in 2012 by Alexis Madrigal in this Atlantic article on the subject. In the last two years, it appears that we’ve discovered just where dark traffic is coming from: Facebook and mobile apps.

The image below, from Chartbeat, indicates which sources are most likely to divulge their source and which are likely to end up as dark traffic.

The first test we’re going to look at was done by Chartbeat. They tracked how dark traffic spiked when an article was shared on Reddit and then on Facebook. As you can see, there is a very strong correlation between the increase in dark traffic at the same time traffic from Reddit and Facebook rose. 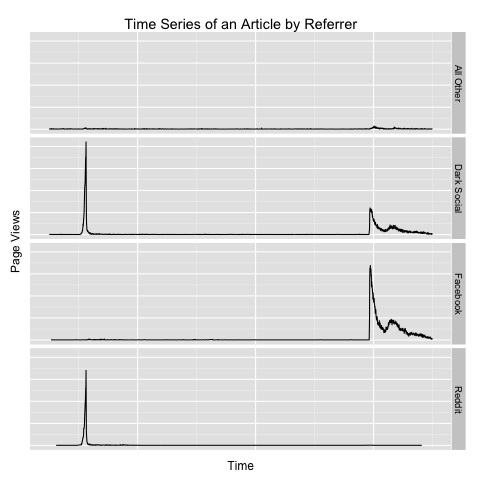 The second test we’re going to talk about was done by the aforementioned Alexis Madrigal, coiner (hey, spell-check didn’t complain, so I’m calling it a word) of the term dark traffic. While still working at The Atlantic, he ran a test where he created an article that was buried. He then posted a link to the test article on Facebook and asked people who were on mobile to click on it. As you can see in the graph below, while some visitors were listed as having come from Facebook, the majority showed up as dark traffic (listed as Typed/Bookmarked).

These two tests point to some very convincing indications that mobile traffic is simply not coming with appropriate referral data the majority of the time.

Facebook is being given most of the credit (blame?) for dark social traffic, but a fairly significant portion is coming from mobile apps in general, as demonstrated with the test involving Reddit. In fact, dark traffic is the majority of social traffic in the United States and Europe, far surpassing all other known types of social traffic, as you can see in the chart from Statista below. 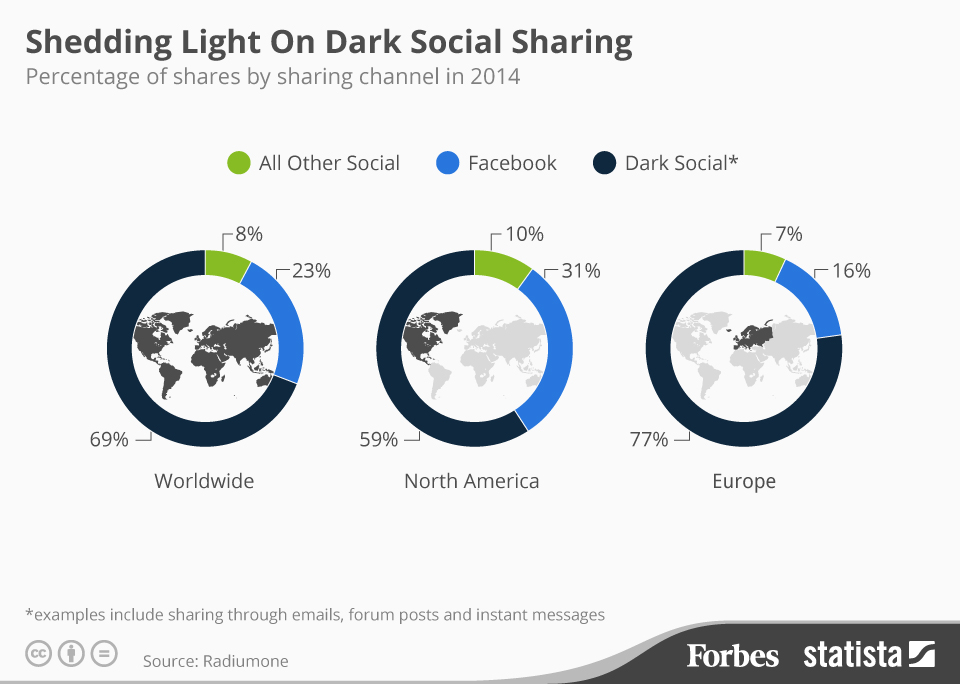 Not being able to pinpoint traffic sources may be an annoyance to webmasters, but knowing where visitors are coming from is of enormous importance to advertisers.  People may be running fairly successful organic advertising campaigns without even knowing it because traffic analytic data is incomplete.  Social media platforms rely on advertising, and according to eMarketer, mobile marketing spend is expected to exceed $40 billion by 2016.

Under-reporting a user base or the ability to drive traffic is only going to hinder platforms looking to sell ads. In fact, I wonder if all the backlash Facebook is facing due to advertisers’ organic advertising difficulties would be mitigated if referral traffic were accurate, especially based on this quote from Madrigal in Fusion:

“The takeaway is this: if you’re a media company, you are almost certainly underestimating your Facebook traffic. The only question is how much Facebook traffic you’re not counting. The bad news is that, if you didn’t know before, it should be even more clear now: Facebook owns web media distribution.”

Facebook is apparently already working on the problem, but it’s unclear if any other social media platform with a mobile app is following suit.