Facebook gives in, allows gifs in ads for first time

In today’s news: Google getting ready to put video in search results, Facebook gives gifs the green light and more…

After Years Of Restraint, Facebook Tries Allowing GIFs In Ads And Page Posts

Facebook first relented to letting users post animated gifs in May, and it is just now getting around to letting advertisers use gifs in ads. Initially, Zuckerburg didn’t want to allow animated gifs on the site at all, probably in fear of the site becoming the visual horror that MySpace was.

Currently, animated gif ads can only show up in Boosted Page posts, and Wendy’s and Kuat, a Brazilian Coca-Cola brand, are the first to try the new ad format. Facebook is still quite tentative about their use, and if people do not respond well to them, they may end up being scrapped.

Bing and Yahoo recently started testing video ads in their search results, and it looks like Google is considering a similar move. Facebook is essentially printing money with their video ad offerings, and Google clearly wants access to that press.

It is unclear if people will need to click on part of an ad for the video to show up, as it does with Yahoo and Bing, or if it will just load in results. Google hasn’t officially said anything about it other than that they are testing some things.

Not satisfied with getting a few hundred dollars from a smart phone purchase, both HTC and Samsung have been caught using push notifications to send ads to owners of their brand of phones. Phone notifications from brands are supposed to tell users about updates to support apps, but they’re being used to do everything from advertise new hardware to TV shows. 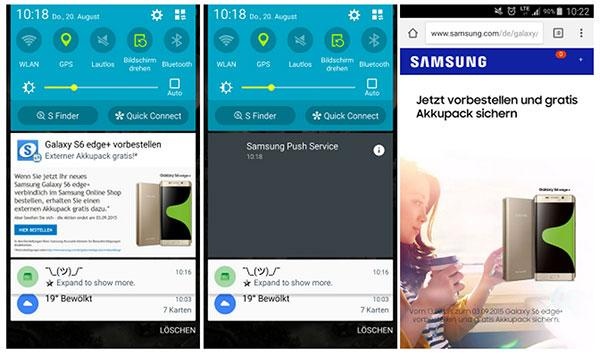 This sounds like a great idea, it’s just doomed to fail. Unlike standard ad blockers, which just completely eliminate ads with no funding towards a content provider, Adieu aims to get rid of ads while still providing compensation. For about $5, Adieu will block 500 ads. This works by having the program bid on banner ads and, once they ad space has been won, replacing the ad with an image of the user’s choosing.

The problem is that ad blockers are free and this is not, and many people don’t actually care about content providers getting compensation. Additionally, there are many websites where the cost for ad space goes way beyond Adieu’s means, so it’s a limited ad blocking program that people have to pay for. Great idea, but if people wanted to pay for content, paid subscriptions and pay walls wouldn’t fail so spectacularly.