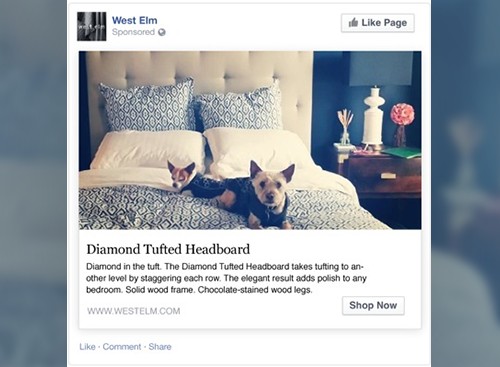 According to AdWeed, Olapic, a social marketing platform, has launched a new type of ads for Facebook. Called Predictive Consumer Generated Ads, and doesn’t that just roll off the tongue, images are culled from Instagram, Twitter, Vine and YouTube, and are integrated into ads that display on the social media site.

The new ad format uses a predictive system that finds images that are most likely to get people to click on an ad. One of their main purposes is to make retargeting feel less like harassment. Instead of seeing the same ad over and over after a visitor has gone to a company’s website, the ads use different but similar images. Per Olapic’s CEO, Pau Sabria:

[The ad is] often a user-generated photo that you have never seen, but that speaks to the same product, so you’re being retargeted in a much more subtle way.

Olapic uses an algorithm that goes through images posted on social media sites relating to brands, over a 100 of which are involved and include Jet Blue, Lancôme and West Elm, and picks out ones that are most likely to draw people’s attention. Once the owners of the images give permission, which is requested by Olapic, they are used in Facebook ads.

West Elm, one of the first brands to test the new Facebook format, already regularly uses images from customers on their website and to promote their brand. The company says it is an excellent opportunity to show how their products are being used by real people.