Twitter has announced that they will begin showing ads outside of the platform’s website and its app, with two partnerships already established with FlipBoard and Yahoo Japan.

Twitter is having problems growing its member base, which is already dwarfed just about five-fold by Facebook, and it needs to figure out a way to show more ads to more people. Although Twitter has made overtures to make the site popular outside of the US, one quick and easy way to get more eyeballs on ads is to start showing them outside of Twitter. In spite of the fact that Twitter is expected to be sharing the ad revenue with partners that display the Promoted Tweets, this gives them a much larger audience.

According to Twitter, tweets fit seamlessly into a number of other media formats, from TV to mobile apps, so it’s not a huge leap to start showing Promoted tweets in other locations.

FlipBoard is an excellent starting point as tweets are regularly integrated into the “create your own magazine” app, so ads will just join the mix. 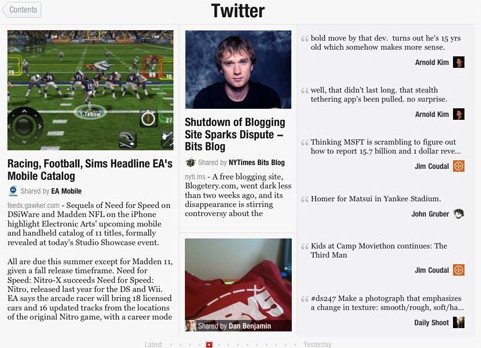 Twitter says that YahooJapan also already integrates Twitter into the site, although I couldn’t see an major signs of such a thing, but that may be because I may have less than zero ability to read Kanji, so I was basically clicking on things at random looking for something tweet-like.

Twitter also owns MoPub, which gives them access to one billion mobile device users, but Promoted Tweets aren’t able to streamline into apps the way that banner or even limited character text ads will. It is uncertain what, if anything, Twitter intends to do to address this.