Google did a stellar job of creating a headline that didn’t give any indication of the topic, which was that by the end of the year, you’ll no longer be able to buy YouTube video ads through the DoubleClick Ad Exchange; instead, you’ll have to purchase them through AdWords or DoubleClick Bid Manager. This change has some people up in arms since only the DoubleClick Exchange allowed third-party buying – the others are Google managed.

However, the reality is that 85% of video ads bought are TrueView, which have never been available through the Exchange. Google is calling fewer options an improvement, which is, of course, ridiculous, but the reality is that it’s probably not going to be a huge change for most.

Candidates Poised to Spread Their Message Through Social Media Ads

This article was technically written before the Fox debates, but its got some interesting information in it. One of the biggest was that Facebook will provide people with a list of users to target if a candidate provides voter rolls for them. (Facebook really loves being as invasive as possible.) Another interesting bit is that Twitter didn’t allow candidates to target the followers of opponents (at least not directly) during the 2012 election, but they are able to now.

Pixel tracking is another thing that is getting its first run with an election. Twitter was the only social media site mentioned that was definitely doing this – I’d be surprised if Facebook wasn’t as well – but campaigns can target individuals on Twitter who visited a candidate’s website.

You’d think that location based ad targeting would involve sending people messages based on their location. However, a survey found that advertisers are more interested in using locations to target particular audiences. Only about a third of agencies surveyed used locations to set up ads with location-relevant messaging, and the biggest reason for not using this method of advertising was the inability to track results.

Twitter appears to be, once again, flailing in the general direction of Facebook. The latest example of this is a new “News Tab” that is being tested as an apparent answer to Instant Articles. In the tab, there is a roundup of the most shared news stories from partners. Since they’re Twitter partners, I’m going to take the “most shared” with a grain of salt.

When people click on a story, they’re given a link to the main story as well as a summary. The issue with this is that Twitter will be curating these stories, and they’re going to be from partners. Why not just go to my own feed and look for popular news stories there, where I’ll most likely see the types of stories I’m interested in anyway? 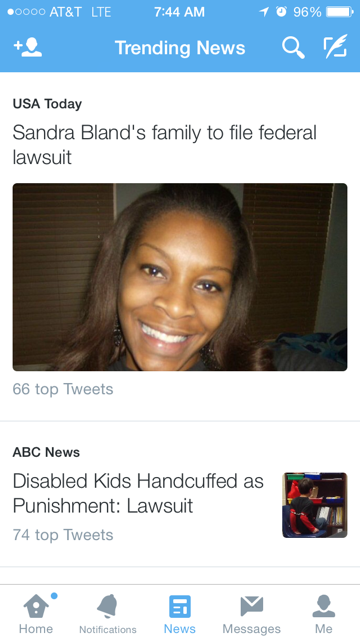