The Independant and a number of other publications have been running stories on a study that shows sex and violence don’t actually sell. The study, which you can download the PDF of here, was done by Robert B. Lull and Brad J. Bushman, and it looks at a number of things related to sales, including Brand Memory, Brand Attitudes and Buying Intentions.

The authors spent a fair amount of time running the numbers through analysis and trying to figure out why some of the highest rated TV shows have sex and/or violence in them but ads with the same apparently are failures. However, they spent a whole lot of time mincing around the elephant in the room: Did people actually buy the stuff being advertised?

Oh, yes, they certainly looked at studies where people were asked if they intended to buy something. But, and I hope you’re sitting down for this, people lie. No, seriously, people don’t always tell the truth, especially when they think an answer will make them look bad.

An ugly form of this is seen in politics with something called the Bradley Effect. Essentially, when there is a black candidate running against a white one, people will say that they are voting for the black candidate to look better to pollsters, even though they intend to vote for the white candidate.

You’ll see a LOT of jumping up and down and screaming about polling and its accuracy in the coming months as the US election heats up. Likely voters, people who say they are going to vote, are often not, but they don’t want to admit that they’re not going to vote, so they say they are. This throws a huge wrench in creating polls that create an accurate representation of voter sentiments, not just public sentiment. As a result polls that don’t say what a candidate or their supporters want will be considered flawed while those that do will be considered totally accurate.

In fact, from a BBC piece on the topic:

The release said, completely without irony: “A third of people in the UK will not give truthful answers about themselves when asked questions by pollsters, according to a new survey.”

Essentially, we know that people lie to researchers and pollsters, just not to what degree. Ergo, you can’t really state that sex and violence don’t sell when you’re asking people if they intend to buy something.

Look at both Chik-Fil-A and Oreo. Chik-Fil-A came under fire in the states for an owner’s negative opinion on gay marriage, and Oreo came under fire for their pro gay stance. Large groups of very angry people swore they’d never buy another chicken sandwich / sandwich cookie again, and the majority of those have almost certainly noshed on the particular sandwich that drew their ire after swearing them off. I say this because neither company saw any significant sales or revenue drop after people ran around with flaming pitchforks castigating them.

Is it possible that sex and violence really don’t sell? That they are a drag for businesses who use them in advertising? Yep. However, it’s just as likely that people who state they’re appalled at the advertising tactics of [insert brand here] are on their way to buy or eat some of [brand’s] products.

I’d also like to point out of sex or violence didn’t actually help to sell stuff, at some point, someone would have noticed. I mean, I get that determining where sales came from, especially when you’re talking about advertising that doesn’t even have CTRs or tracking of any kind, can be educated guesswork at best. However, since the study showed that people’s buying intentions dropped after watching salacious or violent ads, lowered sales after an ad campaign would have been noticed by someone at some point, especially with so many companies using them.

And lastly, the study’s author included Victoria’s Secret in their call out list of companies that use sex to sell their products. They are a lingerie company. What else would they use to advertise?

NEXT ARTICLE →
The only real way to stop ad blockers: don’t give people using them access to content 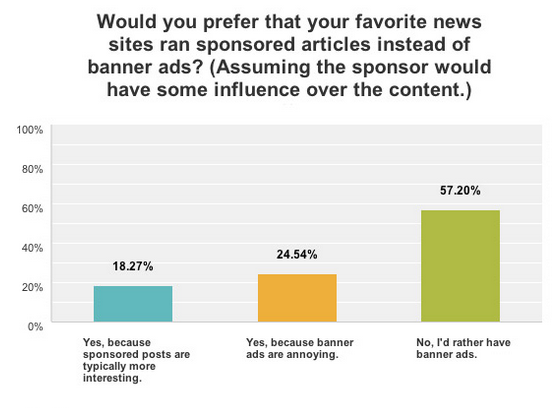 Native ads are popular, but people say they hate them, want banner ads