I’m not sure if this is as a result of the Rise of The Ad Blockers, something that I think now legally has to be mentioned in every marketing post, but it looks like advertisers are smashing advertising into any hole it might fit into. One of the more surprising – and quite likely annoying – places where ads are turning up is in the Windows 10 Start Menu.

The author of this article from Softpedia notes that they found an advertisement for an app for the Disney Channel in their Start Menu recently. 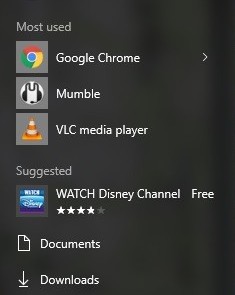 This is a “feature” that apparently showed up in an older build per Infoworld and then it was removed. However, it’s back, and based on the article’s comments, the option to disable ads showing up may not actually work 100% of the time. Ads aren’t showing for all Windows 10 users either, which may be as a result of people not having done updates yet or someone not meeting whatever Microsoft’s requirements are for ads.

In addition to the Start Menu, there’s a potential for ads to show up in another area of the operating system. The lock screen also has a section, Windows Spotlight, that is supposed to suggest features for people to use, but that area is ad free – for now.

It’s not just operating systems that are trying to show you ads in places you wouldn’t expect. The Drum is reporting that TV networks increasingly showing ads in the middle of a TV show. These ads generally show up as sponsored hashtags and polls, but it’s a way to smash an advertiser’s name and their logo onto the screen while the show is going on. This basically does an end run around the issue of people who DVR TV shows and fast forward through commercials.

If you’re a fan of reality shows – and I’m addicted to the Food Network – you’ve probably already seen these types of ads showing up already.