The good, the bad and the very surprising about Click Farms

According to the Business Dictionary, the bandwagon effect is defined as:

A psychological theory where individuals will do something primarily because other individuals are doing it… This effect has the capability to produce wide implications, but is most often seen in the areas of politics as well as in consumer behavior. For instance, in politics, individuals may vote for a candidate because he or she is most popular and the voters want to be considered as part of the majority.

In other words: monkey see, monkey do.

There have been a number of studies looking at how much the bandwagon effect influences people’s behaviors, and there are a number that indicate it can play a significant role in determining how people act. This behavior is one of the reasons that click farms are so popular and that so many people, including business owners, politicians and celebrities, use them.

The New Rebpulic did a feature on a particular Click Farm, located in the Philippines in Cebu City. Along with detailing the process of creating fake accounts, which I’ll get to in a minute, the article also leads me to believe that Facebook pretty much brought this on themselves.

What was astonishing to me is how easy the process of creating fake profiles is – and quality ones at that. By using the website Fake Name Generator, you can create an entire profile of an individual in seconds. 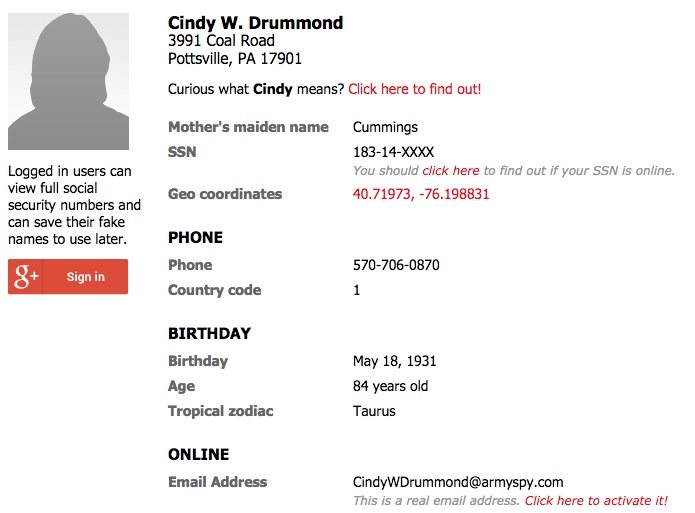 Along with name, age, fake SSN and the other data you see in the image above, the page also provided a height, weight, employer, job description and vehicle for this imaginary person. In the farm described by TNR, profile images are scraped from dating sites (the majority of fake profiles are for attractive women in their 30s) and these accounts are even verified via a text message.

By purchasing SIM cards that normally cost around $10 in the US for pennies, the Like Farm is able to add an additional layer of legitimacy to the accounts it creates. Even if the account is flagged as being fake, the SIM card is simply put in a phone again and can be used to respond to a text from Facebook verifying the account belongs to a real person.

Likes and followers are pretty cheap and easy to get. It costs around $20 to get 500 likes, and bulk discounts are available. Most services focus on Facebook, but they are available for Instagram, Facebook and Twitter, along with a variety of others. Because they are so inexpensive and simple to obtain (Google offers both organic results and paid results for them), it’s not just businesses that are interested in them.

Politicians and celebrities also have been accused of buying likes and followers because of the implications of favorability that they provide. Both Barack Obama and Mitt Romney had to deny charges of Like buying in the last election, and I’m pretty sure both lied.

Although social media in general has made Like Farms a thing, I personally put most of the blame at the feet of Facebook for the phenomenon. A combination of a bait and switch attitude towards organic advertising and shoddy advertising practices have created a perfect environment for Click Farms to grow and flourish.

As we’ve talked about here, Facebook’s organic reach is dead and buried. However, before killing it off, Facebook allowed businesses and a bunch of other people who rely on social media to get used to the idea of marketing from the site. Is it really surprising that people would want to take shortcuts and bypass paying Facebook to attempt to keep advertising on the site going?

Facebook, and really everyone else, is not particularly interested in ferreting out the issue, mainly because fake accounts inflate their membership numbers, something that is of major importance to advertisers. As a result, Click Farms are pretty much being allowed to just keep on keeping on.

It’s not all roses

Although I’ve made it sound like Like Farms are a great and cheap way to obtain the appearance of influence and popularity on social media, there is an ugly side to them. Like Farms can actually kill the effectiveness of organic advertising and paid advertising campaigns.

In an effort to make fake profiles appear more legitimate, bots are employed to Like more than just the businesses they are paid to boost. The average American only likes 70 things, but fake profiles can like hundreds or thousands. When Facebook is paid to garner Likes for a business, they are going to show these ads to people most likely to generate them, which are pretty much going to be fake profiles with bots attached.

All well and good, but most algorithms that determine how frequently content shows up are based on continuing interactions from followers. A fake Like or follower can therefore have a negative effect on future content. Along with this, ads often are displayed to people who have indicated previous interest.

Therefore, if a bot Likes something, the next time an advertising campaign is created, it’s probably going to end up being displayed the fake accounts. Lots of fake Likes mean lost of wasted impressions. Since bots are essentially Liking machine guns, Liking everything in their path, it’s not just people who pay Click Farms that see their advertising campaigns get nuked.

← PREVIOUS ARTICLE
Some truth about what works in Twitter mobile ads