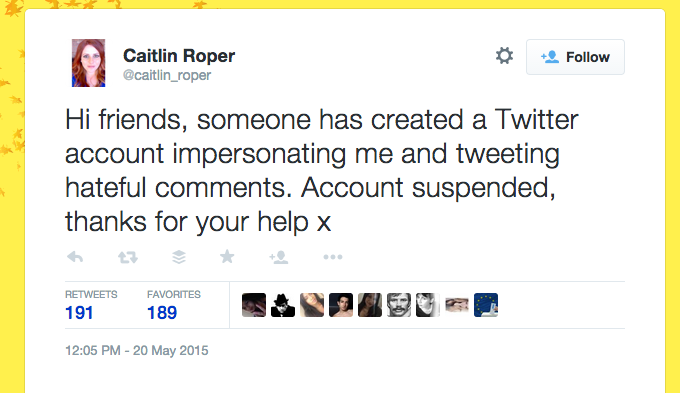 Twitter has been covering itself in glory lately. On the heels of having Promoted Tweets showing up in X-rated feeds, the social media site also just had to delete an ad that instructed transgender individuals to kill themselves.

The Promoted Tweet was attached to a fake account1 under the name of Caitlin Roper, a feminist activist.

Business Insider discovered a post on 4chan where an anonymous idiot takes credit for it. The Tweet was reported and Twitter of course moved to delete the ad and suspend the account. Even if Twitter didn’t have a policy against ads that harassed people, this is the last thing that any ad provider wants to have associated with their name.

This could have all been avoided (I would at least hope) if Twitter had a human being actually looking at ads before allowing them to be published. However, that takes time and money, and most advertisers aren’t going to want to wait for a real person to approve their ad, especially since 99.999999% are going to be acceptable.

However, you might think they’d at least have a flagging system for keywords in ads. I mean, how many times do you think that “suicide” is going to show up in an aboveboard ad?

A Twitter spokesman has reportedly been responding to media queries by stating:

As soon as we were made aware, we removed the ad and suspended the account.